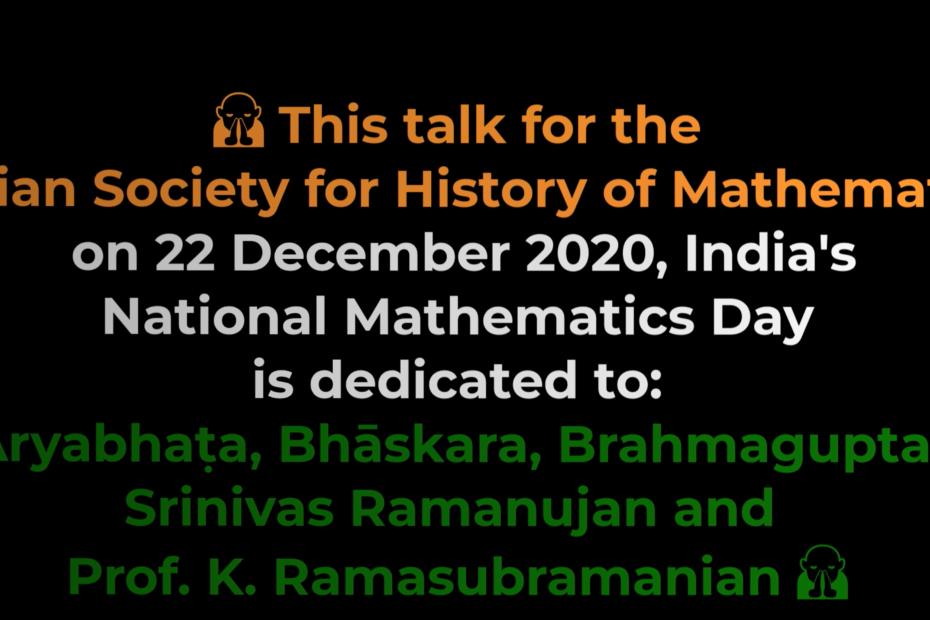 This 3-day international conference on History of Mathematics organized during December 20 to 22, 2020  received wide participation from across the globe. Total of more than 43 abstracts were received, and 30 talks were delivered by renowned professors, mathematicians and researchers from different parts of the world covering all aspects of history and development of mathematics, apart from  12  other talks which were mathematically technical in nature.

The conference was inaugurated by Prof. R.C. Gupta on December 20, 2020, at 10: 00 am. In his address, Prof. Gupta recalled his long association with the ISHM and  Ganitabhāratī. He emphasized the need for the younger scholars of the history of mathematics in India to study all source materials, and develop the ability to study the material in  Sanskrit and other languages. He also emphasized the need for having courses on Indian mathematics at the PG level, at the least. Prof. M.S. Sriram delivered the welcome speech and recalled the contribution of various persons to the development of the ISHM  over the past 40 years. He stressed the need for Indians to have their own assessment of the Indian tradition in mathematics and other traditions too. Prof. M.C.Joshi proposed the vote of thanks at the end of the inaugural function.

Session 1 was scheduled during 10:30 am to 1:15 pm on December 20, 2020. Prof. S. G. Dani (Univ. of Mumbai- DAE  centre for basic sciences, Mumbai) chaired the session. The first four talks in this session were on some mathematical ideas in the Kerala school of mathematics and astronomy, which are not as well known as the infinite series for π and the sine/ cosine functions. Prof. M.S. Sriram ( K.V. Sarma Research Foundation, Chennai) spoke on the second-order Taylor series and other calculus ideas in some Kerala texts. Dr. Venketeswara Pai (IISER, Pune) talked about the use of both regular and semi-regular continued fractions method and their use in astronomy problems in Karanapadddhati and Drkkarana. Dr. Aditya Kolachana ( IIT Madras, Chennai) invited us to have an in-depth look at the method of exact computation of  Udayalagna (the ascendant) in Lagnaprakarana. Dr. K. Mahesh (IIT Bombay, Mumbai) dwelt on the dissectional proof of an algebraic identity for finding the cube of a number in Aryabhatiyabhashya of Nilakantha Somayaji. In the fifth talk, Prof. K. Ramasubramanian and Mr.D.G. Sooryanarayan (IIT Bombay, Mumbai) presented their study of  Narayana Pandita’s  4 x 4 pan-diagonal magic squares with turagagati (horse movement in Chess) .

Session 2  was held during 2:00 pm to 5:00 pm on December 20, 2020, and was chaired by Prof. M. S. Sriram and Prof. Tarun Kumar Das (University of  Delhi). There were six talks in this session. In the first presentation, Prof. Satyanad Kichenassamy (LMR, CNRS & Universite de Reims Champagne-Ardenne, Reims, France) pointed out how the works of Baudhayana, Brahmagupta, Tartaglia and other ancient mathematicians spell out not only theorems but their assumptions and the essential elements of proofs, in his talk on “Impact of History on modern research and teaching”. In the second talk, Prof. Niccolo Guicciardini (Universita degli Studi di Milano, Italy) described the significance of David Gregory’s manuscript, “Issaci Newtoni Methodus Fluxonium” in the scribal circulation of  Newton’s mathematical methods. In the next lecture, Prof. Agathe Keller (Sphere, CNRS & Université de Paris, Paris) pointed out how D.E. Smith helped many Indian scholars like B.B. Datta, Ganguli and P.C. Sengupta to publish their works abroad and encouraged them to write on the history of Hindu Mathematics. In the fourth talk, Prof. Jens Hoyrup (Roskilde University, Denmark) talked about the solution of algebraic equations with two unknowns in Latin and Italian mathematics, and how they were not considered anything special. In the fifth talk, Saeed Seyed Agha Banihashemi (I.H. University, Iran) discussed the role of history in mathematics education. In the last talk, Prof.  Eka Ratna Acharya and Krishna Prasad Bhatt (Tribhuvan University, Nepal) discussed the close link between India and Nepal in the past, as regards mathematics and astronomy in detail, and particularly the relation between Satananda’s Bhaswati, and  Balabhadra’s Balabhodini.

On December 21, 2020 during 10:00 am to 1:00 pm Session 3  with seven talks was held, which was chaired by Prof. Anupam Jain (Kundakunda Gyanpitha, Indore). In the first talk,  Prof. Amartya Kumar Dutta (Indian Statistical Institute, Kolkata) talked on “Arithmetic Mean in Ancient India and Europe”. He emphasized how historians of mathematics have completely overlooked the clear, precise, and abundant use of the arithmetic mean in the works Brahmagupta, Sridhara, Mahavira, Prthudaka Swamy, Bhaskaracharya, and others. In the second talk, Dr. Ramakalyani Venkataraman (Prof. K.V. Sarma Research Foundation, Chennai) presented some selected upapattis on properties of right triangles, areas and diagonals of quadrilaterals, chord, arrow and diameter of a circle in the Buddhivilasini commentary of Ganesha Daivajna on Lilavati. In the next lecture, Prof. S.G. Dani described the formula for the arc and area corresponding to a chord in a circle, their significance, and analogues in other ancient civilisations. The fourth talk was by Prof. Sita Sundar Ram (Kuppuswami Sastry Research Institute Chennai) on nonlinear equations in Bijaganita of Bhaskara. It considered their classification, and how they were solved using ingenious techniques. In the fifth talk,   Prof. K. Gopinath (Indian Institute of Science, Bengaluru) discussed computational thinking in India, and relation to ideas in combinatorics, logic, and linguistics. The sixth talk was by Dr. Omkar Lal Shrivastava and Sumita Shrivastava (Government Kamladevi Rathi Girls P.G.College, Rajnandgaon) on “Prime numbers in Tilyosara of Nemichandra Siddhanta Chakravarti”. He pointed out that Nemichandra was the first Indian who studied prime numbers. He considered prime numbers of the form 2 + 1 , discussed much later by Fermat. The last talk was by  Prof. G.S. Rawat and Mahesh Joshi (Kumaun University, Nainital) who described the contributions of Bhaskara – I, the ancient mathematician and astronomer.

Session 4 was chaired by Prof. Mahesh Joshi, and Dr. Darshana Prajapati (M B Patel Institute of Technology, V V Nagar, Gujarat) and had six talks. The first talk was by  Prof. S.A. Katre, (Savitribai Phule Pune University, Pune) who reviewed the names of decimal places in India from Vedic times to recent times, used by various authors in the Sanskrit Language. In the second talk, Prof. Anupam Jain (Kundakunda Gyanpitha, Indore) discussed texts on Indian languages bearing the name ‘Lilavati’ from 12th century onwards in various Indian languages. Most of them were not translations of the celebrated  ‘Lilavati’ of Bhaskaracharya , but had  ‘Lilavati’ as the title because of the immense popularity of the text by Bhaskara with that title. In the next talk,  Dr. Dipak Jadhav (Govt. Boys’ Higher Secondary School, Barwani, MP) pointed out how ancient mathematicians like Rajaditya gave examples with social and cultural significance to explain mathematical problems. In the fourth talk, Prof. Shrenik Bandi (IPS Academy, Indore) discussed mantras, yantras (mystic diagrams) and their relation with numbers in the Indian tradition and their impact. He gave various examples from Vedic and Jain traditions. In the next talk Prof. Avinash Sathaye (University of Kentucky, USA) disussed the generalized Brahmagupta – Jayadeva- Bhaskara problem, that is, finding all possible integers denoted by c, such that   +  =  has some integer solutions (x , y) solutions. He presented a solution to the generalized problem using essentially Bhaskara’s method and the theory of Bhaskara forms as in Krishnaswamy Ayyangar’s famous paper. The last talk was on “Ramanujan- the lost master of mathematics” by  Dr. Amita Joshi (IPS Academy, Indore), which included a brief biographical account and also some of his important contributions.

During 5:00 pm to 6:30 pm, there was a technical session, which was chaired by Prof. Omkar Lal Shrivastava, and Prof. Mahesh Joshi, wherein around 15 researchers presented their work.

December 22, 2020, is a very special day as it is celebrated as the  National Mathematics Day in India, in the memory of the great mathematician, Srinivasa  Ramanujan. On this significant day session 5 was organized under the chairmanship of  Prof. K. Ramasubramanian during 10. 00 am – 12.30 pm. The first talk by Jonathan Crabtree (Australia) was on

“Brahmagupta’s definition of Sunya failing to be transmitted to renaissance Europe via the Arabic world”.

He also pointed out the necessity to integrate laws of mechanics, physics and common sense better, for the benefit of mathematics teaching today. In the second talk, Dr. Keshav Melnad (IIT Gandhinagar) discussed the development of corrections to the solar longitude from ancient to modern times, along with their significance and mathematical rationale, with some examples. In the next talk, Dr. Sundari Kameswari (IMSEC, Gaziabad) spoke on Tantrasangraha of Nilakantha Somayaji, including his brief biography and some details of the first chapter. The fourth talk belonged to a different genre, altogether, and is of current relevance. It was on “A Model-based analysis of Covid-19 big data: an advanced linear algebraic approach” by Dr. Udayaraj Patare and Shraddha Ingale (Ahmadnagar College, Ahmadnagar). The last talk was by Prof. M.D. Srinivas (Centre for Policy Studies, Chennai) who gave a detailed exposition of the “Folding method of  Narayana Pandita” for the construction of Sarvatobhadra, or the most perfect magic squares. He pointed out many features of Narayana’s methods which have not been appreciated by even experts.  He pointed out that the  folding method is the simplest method  for the  construction of magic squares.

This is being followed by the Valedictory session in which  Prof M.D. Srinivas has given a concise but illuminating account of the life and work of Srinivasa Ramanujan. He has pointed out  how the assessment of  Ramanujan’s work by the experts has been more positive in the recent times, thanks to very detailed studies of his results.

We hope that we have all benefited significantly from the fruitful deliberations during the 3 day web- conference. This concludes the brief report of the 3-day conference.

This site uses Akismet to reduce spam. Learn how your comment data is processed.