Sign the Petition to Teach the Indian Maths of Brahmagupta and Print Your Certificate! 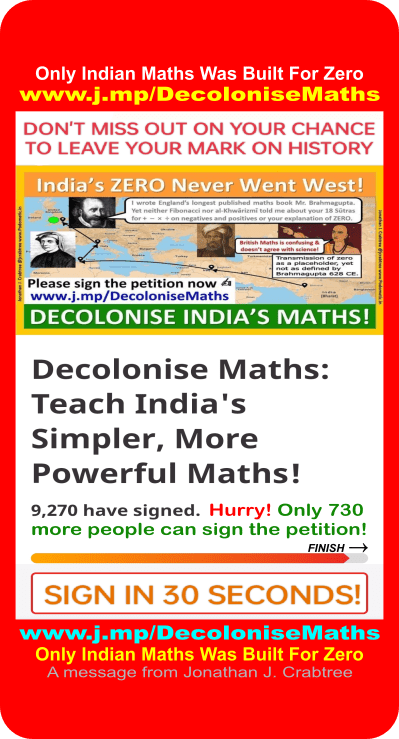 Many if not most fear school maths. Why?

As a historian with decades of learning and research, it’s OBVIOUS to me why the world dislikes British primary level maths education. MANY TEACHING IDEAS ARE WRONG!!! The West updated its numerals from the Roman ‘MCMLXXXIX’ to ‘1989’ (the year my son James was born). Yet my research (download PDF here) reveals the West NEVER updated its thinking from the 7th Century about the true meaning of India’s zero and negative numbers! That’s truly bizarre! So bridges didn’t fall down, many laws and rules were invented to FORCE answers to have the correct answer. Let that sink in a moment. Many laws and rules of maths we were told to memorise at school were actually workarounds and bug fixes needed to fix broken maths foundations.

Numbers simply count or measure quantities. In science, the least quantity of mass or energy you can have is zero. However, the British spread a strange idea negative numbers represent quantities that are ‘less than zero’ which is impossible! So, British maths lessons on negative numbers have been confusing people for centuries.

Brahmagupta wrote the original simple laws of mathematics in the 7th century. Yet these laws of (+ – × ÷) on positive and negative numbers were never understood in the Arabic world!

Maths is confusing today because Europe got its knowledge of India’s maths via the Arabic world. So please sign this petition to request schools teach India’s less confusing simpler scientific zero-based maths.

P.S. After clicking SIGN THIS PETITION please share with friends and family on social media. Also and most importantly, please leave a comment about why YOU think it’s important to sign this petition to teach Indian maths.