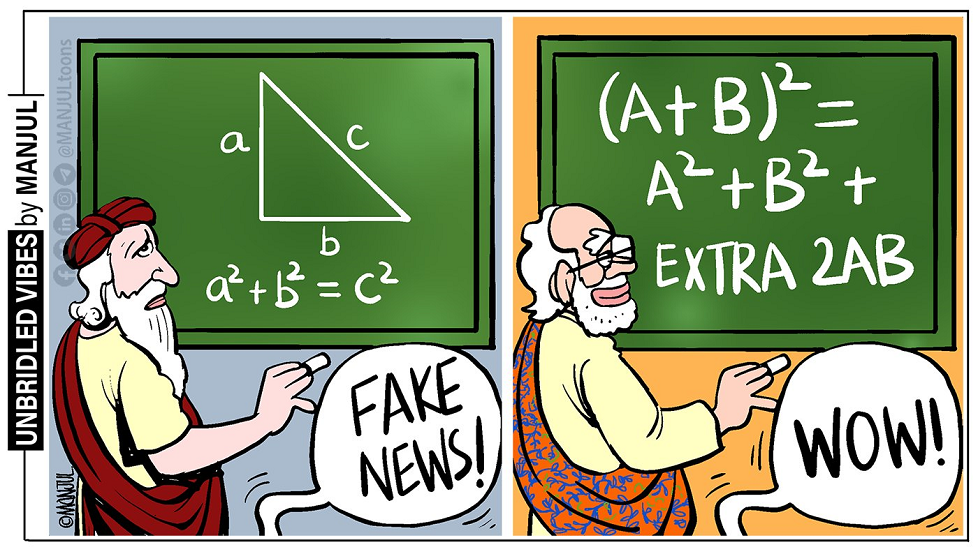 Strange conspiracy theories are circulating that claim Pythagoras and Euclid were myths invented by Christians. False!

Pythagoras is not a myth

Recently I provided information about the life of Pythagoras in an online debate about whether or not the Right Angle Triangle Theorem (RATT) should be named after Pythagoras. Some believe Pythagoreans lived yet Pythagoras did not.

Importantly, I am campaigning to have the name Pythagoras removed from school maths books and replaced with Baudhayana of India.  Read the latest media article about my quest to rename Pythagoras’ Theorem Baudhayana’s Theorem here. Baudhayana wrote about the RATT 200 years before Pythagoras was born. Click here to sign the Baudhayana petition.

Is Pythagoras real or a myth?

This conspiracy theory is easily debunked by many ancient Greek primary sources. Pythagoras did exist and there is evidence if you look for it!

Pythagoras of Samos was a real person. There are simply too many references in Ancient Greek and Ionian manuscripts to have been faked. Benign myths can be created within the primary source language, yet they are usually embellishments of some core truth. By contrast, malicious myths are more likely to be created upon translation from primary sources into secondary sources. In the case of Pythagoras, Greek sources will have more credibility than Latin translations as

1) Confusion can arise as not all words parse correctly from language to language,
2) Original Latin texts may have been biased by being written for a Roman audience, and
3) Latin translations of Greek texts were initially undertaken by Romans as an occupying force.

FYI, in the text below, Pythagoras’ name appears as Πυθαγόρας in Ancient Greek and Πυθαγόρης in Ionic Greek. The material below is sourced from:  https://artflsrv03.uchicago.edu/philologic4/Greek/

The earliest extant reference to Pythagoras in relation to any discovery at all appears in a secondary source Latin Text titled De Natura Deorum (The Nature of the Gods)* by Marcus Tullius Cicero, written about 45 BCE. In it, he wrote:

ENGLISH It is true there is a story that Pythagoras used to sacrifice an ox to the Muses when he had made a new discovery in geometry! But I don’t believe it, since Pythagoras refused even to sacrifice a victim to Apollo of Delos, for fear of sprinkling the altar with blood.

The next secondary source Latin Text is that of Vitruvius Pollio, who in 15 BCE wrote in De Architectura Libri decem^:

ENGLISH Thus the area in number of feet made up of the two squares on the sides three and four feet in length is equalled by that of the one square described on the side of five. When Pythagoras discovered this fact, he had no doubt that the Muses had guided him in the discovery, and it is said that he very gratefully offered sacrifice to them.

No, Euclid was not invented by Christians during the crusades pushing back against Muslim invasions

Sometimes, a picture is worth a thousand words, so here’s a picture with some facts and questions people refuse to address. 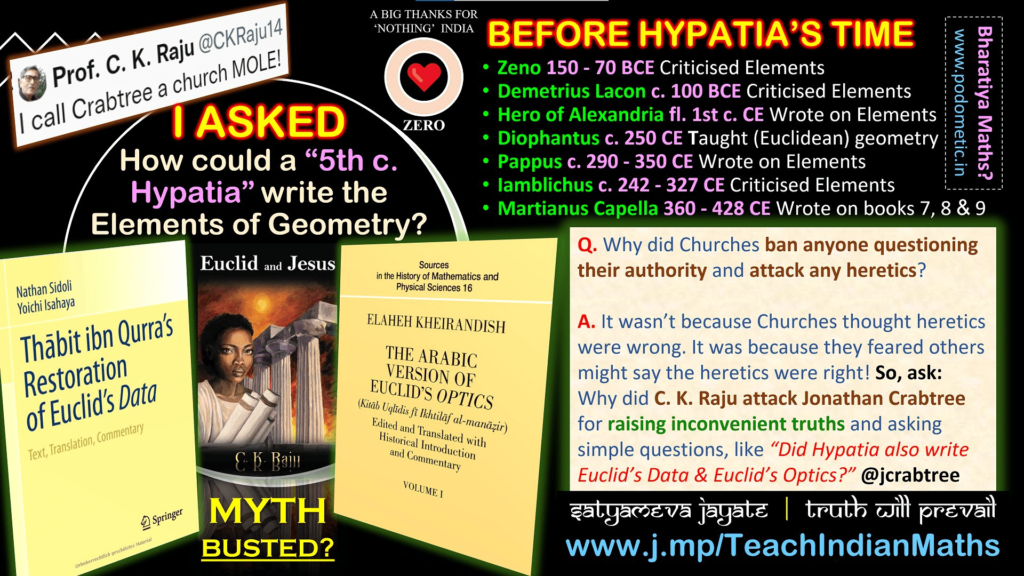 Let’s return to the myth about the Christian creation of Euclid during the 12th century.

The rumour is: “Adelard was the first to translate the Elements , from Arabic into Latin. This was when Christian Europe first heard of the Elements”.

Again, simply not true. Euclid’s Elements was known in Europe at least 600 years before. We read:

Again, the conspiracy theory is not based on an unbiased impartial academic search for evidence and connecting facts. We read:

“‘Euclid’ is not an isolated lie; it is just the proverbial tip of the iceberg, the top of a whole dung heap of lies about history which the church told to justify that Christians were superior”

“Those who claim “Euclid” no longer matters should allow (in school texts) that “Euclid” was actually a black woman from Africa raped on a church altar and then lynched by a mob closely related to the one which burnt down the library of Alexandria.”

So, now Euclid has morphed into a black woman, called Hypatia. The logic is that the Greeks had occupied Alexandria so long they must have become black like the Egyptians upon whose land it is today. I suppose Aussies who have English ancestors must have also turned black over the past 200 years as well! Did the British turn black in India after a couple of centuries?

Once again, let’s look at the evidence. The earliest authoritative reference to Hypatia, long before skin colour was wrongly associated with either inferiority or superiority, is evidence to the contrary.

A Byzantine (now known as Istanbul) encyclopedia collated in the 900s called the ‘Suda Lexicon’ described Hypatia as “exceedingly beautiful and fair of form”. Fair of form obviously means the typical indoor skin tone of a Greek, not the black skin of an African Egyptian.

Anyone doing basic research should know and WOULD KNOW the information on this page. Yet instead of being truthful. Conspiracy theorists keep it hidden from the public because it destroys the fake stories.

Hiding the truth is a stain on the reputation of India, whose motto is Satyameva Jayate – Truth Alone Triumphs.

So, despite the cover of the book Euclid and Jesus portraying Hypatia as black, she wasn’t. There’s no doubt the Egyptians were masters at geometry and that the ancient Greeks would have learnt much if not most of their geometry from black Egyptians. That is not in dispute.

What is plainly ridiculous is the idea Hypatia wrote (Euclid’s) Elements in the 5th century CE. Here are some more inconvenient truths C. K. Raju ignores.

Nowhere does any conspiracy theorist address the inconvenient issue of Euclid’s several other books. The Arabs also translated Euclid’s Data and Euclid’s Optics. Did Hypatia magically write these books as well as Euclid’s Elements?

How is Thābit ibn Qurra’s Restoration of Euclid’s Data explained away? 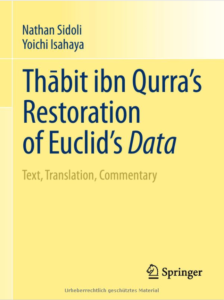 How is the “Kitab Uqlidis fi Ikhtilaf al-manazir, the Arabic Version of Euclid’s Optics explained away? 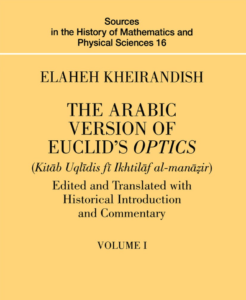 Those saying Euclid was a myth have no answers to any of these fact-based questions, and sadly, they are at it again. Recently they started to extend the ‘Euclid is a Christian myth’ conspiracy theory to include Pythagoras, whom he also claims is a myth, without the scholarly research you should DEMAND! Yet, as I recently noted here, that is simply not true.

Q1. Where is the independent primary source evidence dated within approximately 500 years of Hypatia’s death that states she was black? (The only evidence I found thus far says she was ‘fair’.)

Q2. Why has no African or Egyptian mathematics historian stated that Hypatia wrote Euclid’s Elements or that she was black? Surely, they would want to promote their hero!

Q3. Why has the existence of Euclid’s Elements in Europe at least 600 years BEFORE the bogus claim been hidden from the public? Is that because it would destroy the myth that Euclid was invented during the 12th century?

So far, all the main conspiracy theorist has done is call me a Church Mole and write a totally off-topic blog post in which he writes hundreds of words without addressing any of the evidence summarised above. The conspiracy theorist dances around primary source evidence-based jabs better than Muhammad Ali!

There are plenty of personal attacks against me for my presenting facts and demanding answers. You can read them below along with facts debunking such stupid false claims. 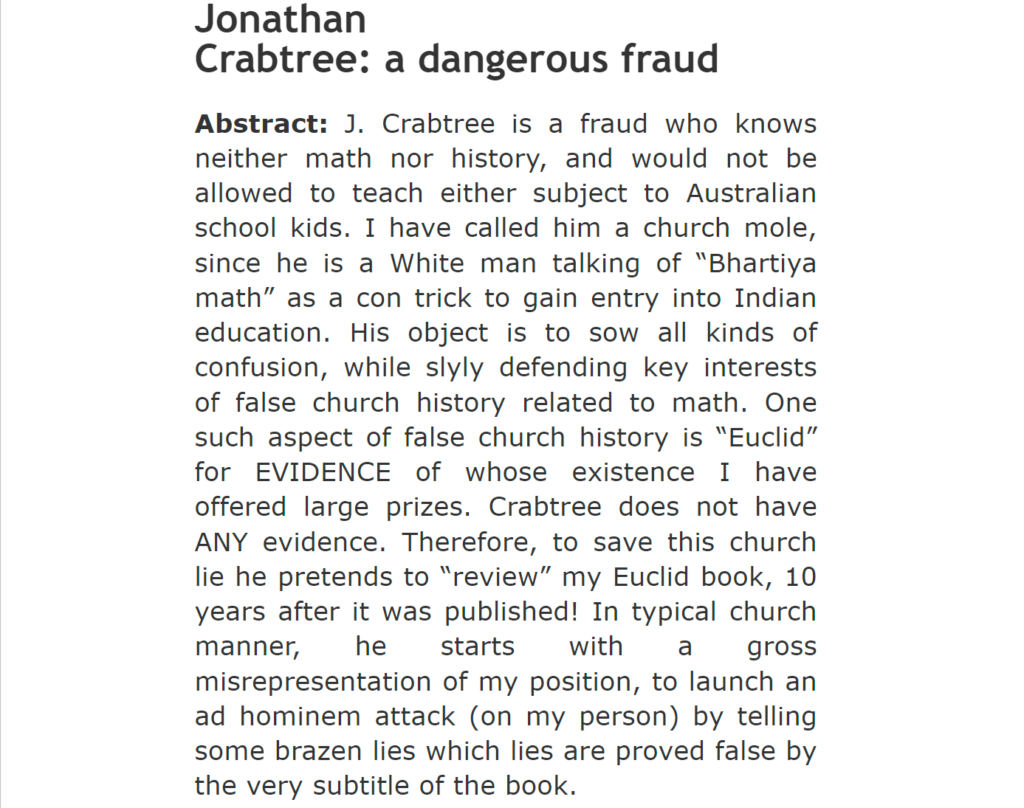